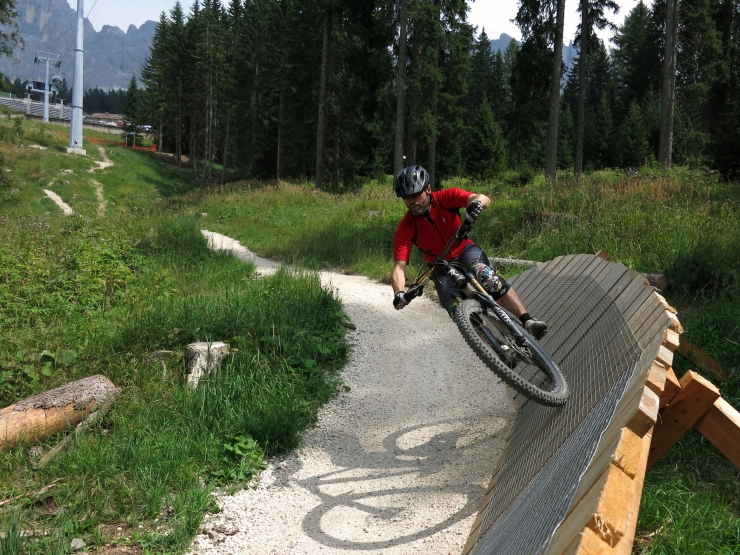 The Dolomites feature the most dramatic mountain range in the Alps.  That’s why I’ve been there a couple of times for work attending photo shootings.  The bizarre rock formations and the via ferratas  – often a remainder from World War I – make the Dolomites the classic hiking and climbing destination on the Southern side of the Alps.  Of course, this is as well a great area for mountain biking and you can even combine biking and climbing.

The legendary rides in the Dolomites tend to circumnavigate a mountain range.  The Sella Ronda is perhaps the most popular tour as you can do it on a road bike, on a mountain bike and in winter on skis.  I did the tour around the Latemar with a total elevation gain of about 2.900 meters and total distance of 56 km/35 miles.  With the usage of 3 lifts, the ride wasn’t that tough, though.

The trails are a mix of single track, dual track, gravel roads and small portion of paved road.  Some steep, root strewn, challenging sections, blended with easy trails and forest roads make the Latemar circumnavigation a great, scenic ride that can be varied for different skill levels.

On the Latemar Tour you would use the new Carezza cable car to avoid most of the gnarly climb up the Catinaccio (Rosegarden) Range to the Carezza Pass.  However, going down the freshly built Carezza Flow Trail is so much fun that you want to use the Carezza lift multiple times.

What a blessing that our hotel in Welschnofen was directly located on the mountain and literally on the Carezza Flow Trail.  So, all those berms, jumps and wall rides – that offer great downhill fun even for novices – became a sort of daily routine to me for one week.

According to the legend the rocky walls of the Rosegarden are King Laurin’s sunken kingdom.  Noble trails, I’d like to say… 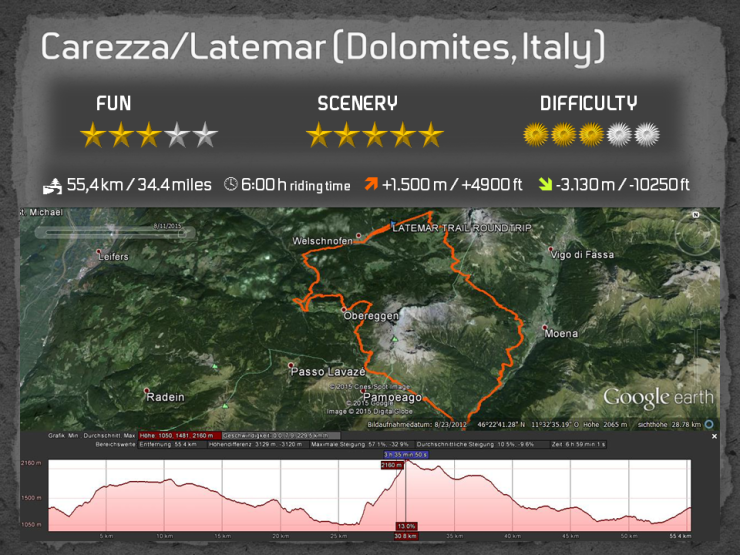